I’m currently sitting on the floor of my dorm, which has ondol (온돌) heating (through the floor), eating a Korean Kinder Surprise. I was a bit surprised to find it down in the “Ministop” convenience store that’s on the bottom floor of our dorm, but there it was! It was also labelled: “For Boys.” Pbbbt. I bought it. And now I’m unwrapping it. It’s weird. And now I’m blogging about it. But it’s ok. It’s just different. I’ll get used to it – like other things.

For any readers who don’t know how it works (AKA maybe you live in the US and Kinder Surprises are “outlawed” there…I’m sorry, it’s just funny): usually, with a kinder surprise, you unwrap the foil off the chocolate egg, break the egg apart and extract the toy and possibly put it together.

In this Korean version, you split the egg apart and peel back the cover of each half. The egg isn’t actually chocolate, and the “chocolate” is this sugary mix with a dipstick and some whopper-esque chocolate balls on top. 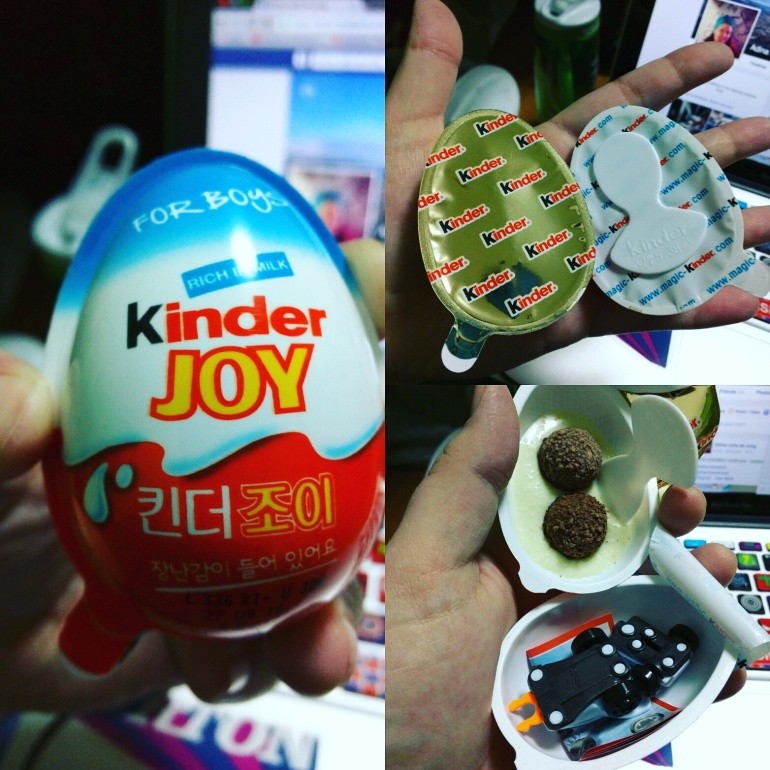 Quite different, but still good! The delivery threw me off a bit, but even though it was not what I was used to, I enjoyed it. It’s something different from a new country that I decided to come and live in for at least the next year. And I know new things won’t always be fun and that there will be times when it gets really tough, but I’ll smash those hurdles when I get to them. Even if those are much more drastic than just a Kinder Surprise.

Ok, so that ondol heating I mentioned earlier? It makes sitting on this floor with a corded connection much better than sitting on a chair in the common area, which is where the wifi is but is also an area that isn’t really heated. At all. You get pretty cold sitting there after a while, and this is coming from a Canadian.

When I heard other blogger’s accounts of sitting at their desk in their Korean school, allegedly “freezing,” I admit I didn’t quite believe them. “So they’re not liberal with their heating. Psshh. Ok. I’ll be fine.” And I am…just not quite as much as I thought I would be. I was expecting Korea to be cold, or at least somewhat cold, and it is. No problemo. I got this: I brought my favourite toques/scarves/mittens – I’m golden. Except…I wasn’t expecting things to be as consistently cold here as they are! After much observation, and speaking as a third party outsider with absolutely no personal interest in the matter, it seems as though Koreans heat the areas that they spend a considerable amount of time sitting in, like auditoriums, classrooms, the cafeteria…except school offices? O.K., perhaps it’s not THAT much observation. I’ve only been here for 3 days. So that is taking a bit of getting used to, though it’s just an excuse for me to wear my toque and scarves even more now…hehehehe…I love wearing my toques.

I’m also getting used to other things too. For instance: I have been, for the majority of my life, a card-carrying member of the “0% Tolerance to Spicy Foods” Club. Yeah. I know. And here I am in South Korea, land of spicy food. Laugh it up, fuzzball.

Well, as the well-informed reader you are, you should also know that I have been trying the crap of all the food here, some of it more interesting and different than what I’m used to, and lots of it great! And lots of it spicy, too, but I’m still eating it! Which, is a win in my book. Tonight, though, we had bibimbap. I would share a picture of it here, except I was way too excited about it to pause long enough for that. It’s delicious! That didn’t take any getting used to.

There’s a lot of things that don’t seem ideal to me, initially, but that I know I’ll adjust to them. Many I at least knew about, due to my plentiful amount of research I did before coming here. I’m finding that research coming in extremely handy, since my expectations for those things are manageable because of it. Funny, how much a little (O.K., a lot of) preparation can do. That, and I know that this is where God has led me and that he provides. Even for things that seem silly, like spicy foods. Actually. Who says God can’t be concerned about the little dumb things in our life that aren’t dumb to us? He’s got enough time and energy for anything and everything, so why not ask? That’s my philosophy, anyway (Matt. 7:7).

On that note, this floor is starting to put me to sleep, so…au revoir!