It’s been a blessedly cool day today in Pohang, Korea, and a good way to start my second semester here.

The humid heat that’s been chasing popsicle-Adina during the summer has finally taken – at least – a day long vacay. Though, during the past couple weeks (my summer vacation) it went up to 41 degrees (C) and I was told it was the hottest summer here since 1994.

It was during this time that my family came to visit, and I showed them around Pohang and then Seoul. We drank a lot of water, practically prostrated ourselves before my air conditioner, carried sweaty bandanas and got lightly toasted by the sun. It was weather that had you wanting to shower every hour. At least, for us Canadians. It’s not that we’re not used to the heat – we’ve had the same kind of temperatures back home – but we just melt like little Canadian icicles with wet heat.

My family still loves me after this experience, by the way.

We had times where we giggled endlessly (okay, it was mostly Mom and I), my brother insisted on surpassing his quota of sibling-inherent harassment, and I finally got to use the threat starting with “If you want to live in my house….” My parents had lots of fun impressing my friends and other random store/restaurant owners when they used their 5 phrases (give or take) of Korean they’d been practicing (especially my Dad – he worked so hard practicing his “Nice to meet you,” in Korean).

It wasn’t long before it felt like I’d never left home and when they left again, it was rather surreal. Then we collectively crashed: they back home in Canada and me in Korea, because we did a lot of things, man!

I got to introduce them to my friends and teachers here in Pohang, which was definitely a highlight. There was even this point chatting with my Vice Principal (such a swell guy) and one of my co-teachers (such a kind and graceful teacher to me) when these two groups took turns telling each other, well, how excellent I was. Or something like that. It was a kind of embarrassing and uncomfortable, but I took it all the same because…well, it’s not like they were lying. Even admitting that scrapes me the wrong way a bit, but hey! It’s good practice to admit both our weaknesses AND our strengths.

Taking them to places around my home was great fun – such as restaurants and coffee shops that I frequent, or semi-frequent, and we were blessed to receive little bonuses here and there: free dumplings, chicken, and ice cream were a few. My family and I were pleased as plums at their kindness.

The first night my family was here, we went out to eat and the sweet lady who runs the place we visited was one who had since remembered me after just my first visit in March (apparently, braids aren’t the most common thing around here). She even brought out three forks for my parents and brother, then scissors to cut up our noodles if we so wished – they have long noodles here in Korea. That was when the dumplings came out, and guys, Korean dumplings or mandu (만두) are fantastic. Just sayin’. We then communicated amicably -if brokenly – for a wee bit before leaving, and my family was already smiling happily their first day here.

Speaking of braids still, I’ve been told that usually only T.V. personalities or actresses wear them…pretty sure. I had a stilted conversation with a lady working the info desk at Homigot Sunrise Plaza (where I visited with my family) because she randomly started chatting me up. She knew just enough English, and I knew just enough Korean – though I did have to correct her when she pointed to my brother beside me, and then at me, saying “wife?” Um, heck no. Sorry Bro, but no. At least I knew the word for sibling: “dongsaeng” (남동생). Once she heard I was from Canada and an English teacher, she told me about her daughter studying in Canada and wanted to give me her daughter’s number and get mine for her. At the end, she used a translator on her phone that said ended up saying, “you could be an actress,” and mimed having braids. Who knew?

The small town it’s next to

We saw some amazing sights, ate corner store ice cream every day (because it’s so cheap and yummy, and because we could. We were on vacation, okay?), we lit little fireworks on the beach at night, we played Dutch Blitz with a mad passion, we melted into puddles together, we watched a little bit of T.V. together, we made dinner together, and we went to church together.

It was a truly refreshing time, being with my family, laughing so much we cried, showing them my life in Korea, and being able to share with them things both new and old in Korea. I’m now even more ready to face my 2nd semester here now! And not just because the heat is subsiding……

Y’know, there’s one more thing I wanted to mention, since it’s totally worth telling. When my family first arrived in Korea, I had already armed them with as much info as I could to make their way from the airport to the train station. Unfortunately, I wasn’t abe to be there to pick them up in Seoul. So, I had to leave them on their own in a foreign country…where English isn’t the first language…in one of the largest and busiest airports in the world…in one of the biggest metropolitan areas…jet-lagged…and on a deadline.  In order to travel across the country.

Well, they barely made it. But hey! Now they can say they did it! With help. And I don’t mean mine, primarily. They had the help of random & kind strangers, my preparation, and most of all: Jesus!

Yeah, I went there. I mean, I’m always going to go there. Anyone following my blog thus far shouldn’t really be surprised by that.

Anyhow. After taking the airport shuttle, going through an eternal immigration and customs, taking the subway to the station, and finding their way into the station (it’s a sizeable train station with bazillions of escalators) redeeming their pre-booked tickets, and finding the right track, they randomly hopped onto a car in their train, randomly chose a row and a seat (poor muffins were so tired they forgot they had reserved seating. Sorry for calling you guys muffins on the internet, but I couldn’t resist!)

Turns out, they chose the right train car and the right row of seats! And 2 out of 3 of them chose the right the seats the first time! The other one chose the right seat the second time, though still forgot the reserved seating. I don’t care how small it seems – it was totally a God thing. His hands were all over it. 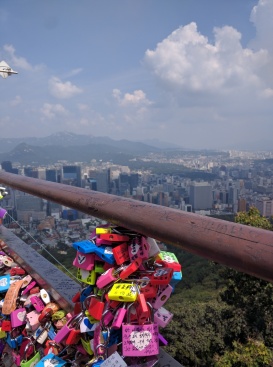 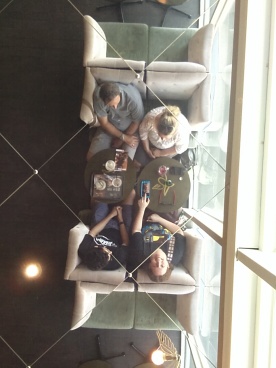 Coffee with the fam